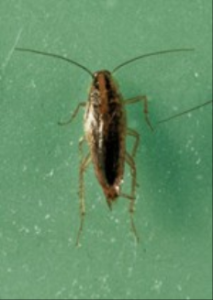 The German cockroach is by far the most important and usually the most common of the cockroaches. In addition to being a nuisance, the German cockroach has been implicated in outbreaks of illness and allergic reactions in many people. This species has worldwide distribution.

German cockroaches can be found throughout structures but show a preference for warm and humid places. They are usually found in kitchens and secondarily in bathrooms, but infestations often occur in rooms where people eat and drink.

Cockroaches have been reported to spread at least 33 kinds of bacteria, six kinds of parasitic worms, and at least seven other kinds of human pathogens. They can pick up germs on the spines of their legs and bodies as they crawl through decaying matter or sewage and then carry these into food or onto food surfaces. Germs that cockroaches eat from decaying matter or sewage are protected while in their bodies and may remain infective for several weeks longer than if they had been exposed to cleaning agents, rinse water, or just sunlight and air. Medical studies have shown that cockroach allergens cause lots of allergic reactions, especially in children. They were even shown to cause asthma in children. These allergens build up in deposits of droppings, secretions, cast skins, and dead bodies of roaches. This makes German cockroach control incredibly vital.

Opening up a New Business or Restaurant? Call Us for the Best Service quotes!